$193.38
Compare
Share:
Medical Alert System! Talk Directly through your pendant to a 911 emergency operator at the push of a button. The Guardian Alert 911 medical alert system is a set - a base station which plugs into the phone jack - and a pendant which is worn by the user.
Skip to the end of the images gallery 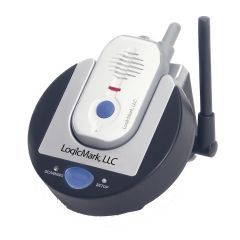 
No Monitoring Fees, Service Charges or Contracts ever.

Medical Alert System! Talk Directly through your pendant to a 911 emergency operator at the push of a button.

The Guardian Alert 911 medical alert system is a set - a base station which plugs into the phone jack - and a pendant which is worn by the user.
The system can operate anywhere in and around the home - with the base station plugged into a phone jack in the central part of the home.

The Pendant runs a year on a AAA alkaline battery (included). The pendant is splash resistant so that he can even be taken into the shower. The Test Button on the bottom of the unit gives an audible confirmation of battery condition. Hold the Test Button in an extra few seconds - and you can confirm that the full system is working.

Why was the Guardian Alert 911 created?
We created this product because of the great need of loved ones or a disabled person to be able to instantly contact a 911 operator in the event of an emergency. These individuals want to lead more independent and safer lives. Countless accidents and deaths occur every year that could have been prevented if 911 was able to be reached quickly.

How does Guardian Alert 911 work?
It is very simple. You just push the blue button on the wearable pendant and you can speak directly to a 911 operator from anywhere in or around the home. You do not need to use your regular telephone.

Do you have to be near a base station for 911 to hear you?
No! Because the Guardian Alert 911 is the world’s smallest cordless speakerphone, you can speak directly to an operator instantly from anywhere in or around the home. This is the only product that allows you to speak from ANYWHERE in your home, not just within 50 feet of a speakerphone. The pendant range is up to 600 feet in a free-space environment! It will cover large homes and even a short distance outside your home.

Are there any monthly charges or contracts?
Absolutely Not! There are no monthly charges, no monitoring fees, no contracts, ever. You purchase the Guardian Alert 911 and it is yours to keep and use forever.

What happens if I am unable to speak?
If you are unable to speak, the Guardian Alert 911 can still give the 911 operator your location by utilizing the caller ID function. Because of this “enhanced 911” system, you can feel even safer that your location is known even before you speak.

How do I install Guardian Alert 911?
Just plug it into your existing phone jack.

Does Guardian Alert 911 use a battery?
Yes, the Guardian Alert 911 uses a AAA alkaline battery, which is included. The battery life is one-year and it can be tested at any time with the test button on the unit. You can also purchase the Battery Back Up Pack for the Alert for added peace of mind.

What is the warranty on Guardian Alert 911?
One Year Limited Warranty

Facts on Emergencies:
Research supports the common sense notion that getting prompt help makes surviving an emergency more likely. The ability to get help also boosts the odds that a senior will continue to live independently. The longer a person spends helpless, the greater the likelihood he/she will be discharged into supportive care. For elderly people who live alone, becoming incapacitated and unable to get help is a common event, which usually marks the end to their ability to live independently. (New England Journal of Medicine)

Facts on Senior Citizens:
As the oldest baby boomers become senior citizens in 2011, the percentage of people 65 and older is projected to grow faster than any other age group. In fact, 26 states are projected to double their 65+ and-older populations between 2000 and 2030.

Facts on 911 Calls:
Over 150 Million emergency calls are made each year in the US.

Facts on Causes of Death:
Nearly 75% of all deaths in the United States are deaths of elderly people. For many decades, heart disease, cancer, and stroke have been the leading causes of death among the elderly, accounting for 70% of all deaths in this age group.

Facts on Falling:
Of the 35 million Americans over 65, about 1 in 3 will fall in a given year. (Center for Disease Control, "CDC")

Seniors are hospitalized for fall-related injuries 5 times more often than they are for injuries from all other causes. Falls are the leading cause of accidental death for seniors. (Center for Disease Control, "CDC")

50% of people who fall require assistance from someone else to get up.

Nearly one half of the older adults who incur a serious injury never fully recover and many lose their ability to function independently for the rest of their lives. A good proportion end up in nursing homes, making falls and the injuries that result, one of the most substantial health threats facing older adults. (Yale University School of Medicine)

About 50% of deaths occur within one hour of the heart attack –outside a hospital.

There is a only a 6% to 9% early mortality rate from Heart attack for those who survive long enough to reach the hospital. Getting to the hospital quickly is the goal. Deaths from cardiovascular diseases in women exceed the total number of deaths caused by the next 16 causes.

Costs related to heart attack exceed 60 billion dollars per year. Coronary Heart Disease is America's No. 1 killer. Stroke is No. 3 and a leading cause of serious disability.

Facts on Strokes
Stroke is the third leading cause of death in America and the No.1 cause of adult disability. Many strokes are preventable and treatable with prompt medical attention. (National Stroke Association)

Facts on Fire - Who is Most at Risk
Senior citizens age 70 and over have the greatest risk of fire death. The fire death risk among seniors is more than double the average population.

Questions: Doesn't it have a battery back up? If so why would you need to buy another one? Is a lock box available? 0 Answers
Question By: Carole on Nov 14 2028 12:18 PM
No answers yet. Be the first to answers the question!

Questions: Can I reprogram with my cell number instead of 911? 0 Answers
Question By: Angelo on Jun 12 2007 12:01 PM
No answers yet. Be the first to answers the question!

Questions: Hi we purchased the key lock box along with the system and the back up batter, but if I can't get to the door to open it, since I am a double amputee. How do I let 911 know I have a lock box outside of the house, and what if I can't talk to give them the combination...do you think they will have something in place for that kind of a situation 0 Answers
Question By: Turtle on Nov 11 2002 10:15 AM
No answers yet. Be the first to answers the question!

Questions: Another company that I was looking at said that their product would not work with digital phone (Time Warner Cable). Could you let me know if this matters with your product? Also, how many person's numbers can be stored in your system? 0 Answers
Question By: Linda on Oct 11 2016 6:02 PM
No answers yet. Be the first to answers the question!
COMPARE PRODUCTS ()
Related Products
VIEW
141 0300
Close