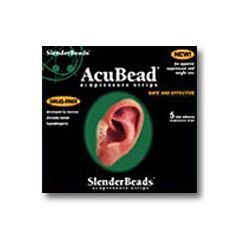 In the years since Dr. George Kramer began practicing acupuncture, he became concerned with what to do for patients between visits. With acupressure, he could often relieve headaches, neck and back pain by placing individual ear acupressure beads on appropriate pressure points for home use between visits. These beads would only last a few days before they had to be re-applied by a professional. Due to the inconvenience and cost of an office visit, patients would often have to use other means to control symptoms between appointments.

So Dr. Kramer conceived of a system where patients themselves could easily apply the acupressure beads at home between appointments. Joined by Dr. Frederick Strobl, a neurologist and co-founder of CNS, Inc. (manufacturer of Breathe Right® nasal strips), the two doctors and a team of acupuncturists created AcuBead® Acupressure strips.

There are four products currently developed: (In addition, further AcuBead® acupressure strips are in development for other conditions).

AcuBead SlenderBeads Acupressure Strips use auricular appetite suppression points on the tragus which, in Western Medicine, is explained by causing reflex stimulation of the Vagus Nerve. This slows stomach emptying, increases feeling of fullness and lessens hunger. Initial clinical studies showed an average weight loss of 1-2 lbs. per week when used properly for individuals motivated to lose weight.

Questions: hi! i want to know is it fairly easy to apply beads are instructions simple. does it come with pics? 1 Answers
Question By: ter on Nov 30 -0001 12:00 AM
They apply easily, but make sure you clean your ear first with alcohol and make sure it's dry. They stay on for about a week. I advise switching ears as they do make your ear a little tender after a week of pressing.
Answer By: KHARADITE on Jan 14 2007 10:14 AM
COMPARE PRODUCTS ()
Related Products
Close