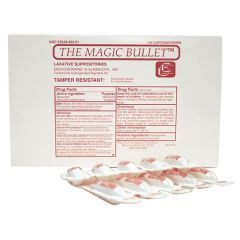 Due to manufacturer's return policies, titanium wheelchairs, custom wheelchairs and other custom equipment may be returned to Allegro for repairs only - no refunds or exchanges can be made at any time.
Skip to the beginning of the images gallery
Features
Details

The Magic Bullet Suppository by Concepts in Confidence


The one of a kind Magic Bullet Suppository is designed to aid with chronic constipation and bowel impaction.

What ingredients are in the Magic Bullet Suppository?

Why use the Magic Bullet Suppository vs. Dulcolax, Theravac/Enemeez, CEO-TWO, Fleets, and hydrogenated vegetable oil-based bisacodyl (HVB) suppositories?
Dulcolax and the other Bisacodyl suppositories have the same active ingredient (10mg Bisacodyl) as The Magic Bullet. The base or carrier of the active ingredient in the suppository is what differentiates the Magic Bullet from all of the rest. The Magic Bullet uses a Polyethylene Glycol base which is water-soluble. This base allows the Bisacodyl to be activated by the body’s own moisture shortly after insertion. The Dulcolax and other Bisacodyl suppositories use a vegetable oil base. This type of base takes longer to work because it needs time to be melted by the body's heat, which can cause continued mucosal irritation with resultant mucus accidents (anal leakage) hours after the Bowel Program (BP).

Clinical Studies have shown that The Magic Bullet proves to be just as effective as mini enemas like Therevac and Enemeez in a bowel program plus they're easier to use as it requires less hand dexterity.

The Magic Bullet uses stimulation of the bowel wall to cause peristalsis to push out the stool. CeoTwo on the other hand produces a gas inside the bowel which relaxes the bowel, causing the movement.

The Magic Bullet is far less costly than its competition. Less than half the price of Dulcolax, and less than a quarter the price of mini enemas.

Finally, it is concluded that the replacement of hydrogenated vegetable oil-based bisacodyl (HVB) suppositories with Polyethylene Glycol base suppository, such as The Magic Bullet, will reduce bowel care time by 50%(J Spinal CordMed1997;20:227 229).

How should the Magic Bullet be inserted?
Remove the suppository from the outer white wrapper. You should use a water-soluble lubricant such as KY or Surgilube to ease insertion and ensure ease of entry. Vaseline (Petroleum Jelly) should NEVER be used as it is a barrier between the active ingredient and the bowel.

Improved_Bowel_Care_With_a_Polyethylene_Glycol_Bisacodyl_Suppository (38.92 kB)
Reviews 170
Filter By Rating
Write Your Own Review
Product Q & A

Questions: Why does it expire? Is it safe to use beyond expiration? 1 Answers
Question By: C5 Quad on May 12 2013 10:29 AM
I've actually called the maker of the Magic Bullet (Concepts in Confidence), and asked the same question. They told me the Magic Bullets are good for a full year after the expiration date. They are mandated to put expiration dates on their products that fall within a specified period, but the actual useful life of the product goes well past that date. I've used the product for almost a year past the date on the package (due to an extended rehab stay I had in a hospital, I had almost a full box of the Magic Bullets at home when I got back home), and they worked just as well as newly-bought ones did. So don't worry about the expiration date; it doesn't mean much.
Answer By: Stosh on Nov 13 2021 1:25 PM

Questions: what is te difference between the Bullett ansd a fleet saline enema? 1 Answers
Question By: Mary on Oct 14 2030 5:05 PM
I would say the suppository is meant to be used as part of a bowel program for regular bowel maintenance. A fleet saline enema would be more appropriate for occasional constipation not addressed by a regular regimen, not regularly.
Answer By: JS, L1 SCI on May 15 2011 10:28 PM

Questions: Need to get rid of plug from magic bullet instead of having a slimmy substance coming out later. Would appreciate any suggestions! 7 Answers
Question By: Shell on Jan 12 2005 3:18 PM
If you go to the Magic Bullet website. They tell you that at the end of your bowel program, if you insert a small amount of water soluble lube, it stops the magic bullet stimulation. You won't have that small discharge later. Works great for us.
Answer By: Jackijb on Mar 16 2017 9:25 PM
Yes, active ingredient is Bisacodyl 10mg.
Answer By: Damitched on Dec 12 2017 7:49 PM
The slimy substance is not likely to be the suppository. It's probably mucus that lines the intestinal tract. I get this when I'm not eating enough whole grains, vegetables, and fruit.
Answer By: althegrrl on Dec 12 2021 9:58 PM
If you are getting a substance coming out after you have finished your bowel program, then you have not completely finished. The suppository will evacuate itself upon completion. You are probably rushing, try to do a digital stimulation and see it that takes care of the problem.
Answer By: Mike on Dec 12 2021 10:21 PM
From website: Magic Bullet Suppositories do not use an oil base (hydrogenated vegetable oil) as does Dulcolax and other bisacodyls, where the oil base has to melt before the bisacodyl can stimulate the bowel to contract and push out the stool.
Answer By: karlee on Jan 13 2004 4:32 PM
Keep suppositories in refrigerator.
Answer By: Mp on Jan 13 2008 4:57 PM
The discharge you are experiencing is due to the irritant effect of the bisacodyl. It is a stimulant or contact laxative. Why would you want to use this product and put up with constant smelly discharge??? Enemeez works in 2 - 15 minutes, has no discharge and virtually no episodes of incontinence.
Answer By: Steve from Flag on Mar 13 2006 2:36 PM

Questions: is there a proper placement protocol of this product? 6 Answers
Question By: Jane Butler on Sep 11 2007 3:55 PM
My rehab hospital taught my family to put plenty of lube on the bullet, then insert it along the rectal wall (you don't have to put it in very far) and hold for 45 seconds (or until the anus contracts) to make sure it stays in place.
Answer By: Moo on Oct 12 2025 7:13 PM
It should be pushed up against the bowel wall to work properly.
Answer By: Bee on Dec 12 2018 7:01 PM
yes, as high as possible and next to the bowel wall and against the stool
Answer By: Mike on Dec 12 2021 10:22 PM
up and to the left inner wall is where you should place any suppository
Answer By: recklesswonder on Dec 12 2022 11:10 AM
First I put on a flow. I open the casing and lube the bullet. I then lube the glove and push the bullet up the rectum as far as my index finger will go. Then I exit.
Answer By: barbie on Dec 12 2022 9:31 PM
"â€¢For use rectally as a laxative" My health inserts by hand using a glove.
Answer By: karlee on Jan 13 2004 4:41 PM

Questions: Is the active ingredient bisacodyl if so how much is in each suppository? 1 Answers
Question By: quad66 on Jan 12 2011 5:25 PM
The Magic Bullets have the same ingredient in them as the over-the counter suppositories do. The main difference is how the suppository is made. The over-the-counter suppositories are oil-based, but the Magic Bullets are water-based. For me, the oil-based ones don't work well at all. But the water-based ones work, well, like "magic". Go to the Concepts in Confidence website to learn more about the difference between their product and the other over-the-counter ones.
Answer By: Stosh on Nov 13 2021 1:31 PM

Questions: Has anyone experienced leakage after using the Magic Bullet? My daughter has CP, & we use the Magic Bullet for her bowel needs. They worked perfectly for about 6 months but now she's having leakage about 6-8 hours after she has the BM. Any advice or tips? 7 Answers
Question By: Mom on Nov 13 2003 11:02 AM
Leakage may indicate a fecal impaction I recommend calling the physician for evaluation.
Answer By: JS L1 SCI on May 15 2011 10:31 PM
I use only half now, and check to see if there is a bowel movement right there before inserting. We only had two midnight bm's after an evening MB.
Answer By: dr steve on May 15 2027 2:34 PM
Unfortunately not all of the suppository may come out right away after a bowel movement, but it eventually does after sitting upright a while. After all BMs are over, sit upright a while then manually stimulate to get it out.
Answer By: David on Feb 14 2010 6:17 PM
I am a quadriplegic so my needs are a little different than your daughters but I have never experienced any drainage after finishing my bowel program.
Answer By: Jack on Feb 14 2011 9:32 AM
Can she push? If so make sure she is pushing at the end of the BM. Sometimes there is a little more that will fall out later if you don't do that.
Answer By: Chicago on Feb 14 2011 11:30 AM
Are you giving her enough time to empty her bowels. I use it with my son that has a SCI, and he seats in the shower chair over the toilet for 1hr. For my 90yrs old Dad with Alzheimer's we do the bowel program on the bed and do wait 1hr too, no problem with leakage. Good luck
Answer By: MI on Apr 14 2022 9:31 PM
My son who is a C-5 quad, uses only half a magic bullet. It gets the job done and since we have been doing that, along with giving him enough time, it cut down on the surprises.
Answer By: teri on Jun 14 2004 2:57 PM
COMPARE PRODUCTS ()
Related Products
VIEW
178 190938
Close