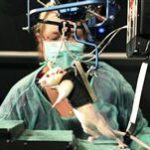 Millions of people around the world suffer from severe spinal cord injuries that result in permanent loss of control of their arms or legs, or loss of bladder, bowel or sexual functions. Now, US researchers have developed an oral medication that offers hope that some of these lost functions could be regained. When given to laboratory mice shortly after a spinal cord injury, the drug restored the animals' mobility.

The experimental drug, called LM11A-31, works by blocking the release of a protein that after spinal cord injuries destroys oligodendrocytes, which are nerve cells that surround and protect axons. Axons are the long, thread-like nerve-cell projections that help transmit motor impulses between the brain and the rest of the body.

In experiments with mice with crippling spinal cord injuries similar to those seen in humans, the drug overcame a major hurdle in conventional therapies. The compound easily crossed the blood-brain barrier - the natural partition that protects the brain from potentially harmful foreign substances in the bloodstream - and prevented the normal post-injury die-off of oligodendrocytes.

Click here to read the whole story at Voice of America