What's purple, round, and all over Michael Phelps and other Olympic athletes? Cupping - is it for you?

What's purple, round, and all over Michael Phelps and other Olympic athletes? Cupping - is it for you? 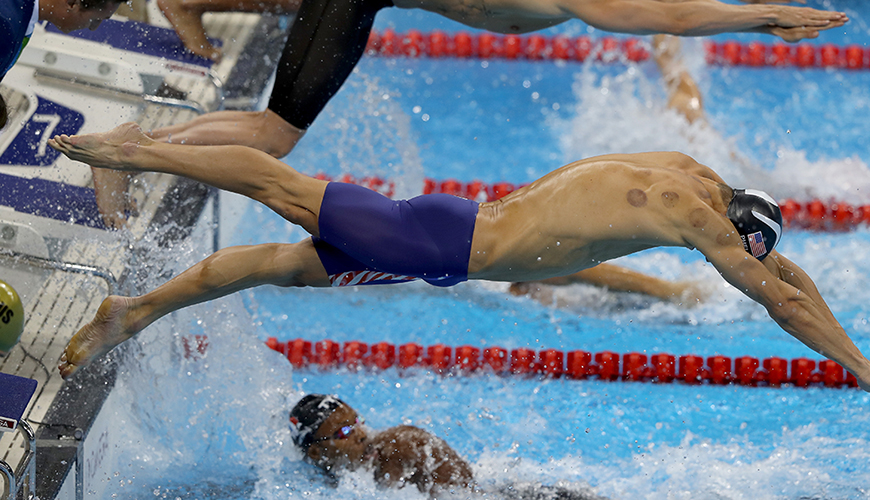 News coverage of Olympic athletes like Michael Phelps, Dana Vollmer and Alex Naddour covered in purple spots has everyone asking questions.  For instance, since when did Michael Phelps and Dana Vollmer begin training with a giant octopus?  Are those purple round spots on their bodies  caused from the suction cups of giant octopus tentacles?

What really is causing these spots and more importantly why do they do it?

Athletes often use alternative therapies such as the one causing all the spots, a.k.a. ancient Chinese "cupping", for claims it aids healing, muscle recovery, and blood flow while reducing pain.  With strict doping prevention in sports competitions, athletes seek alternative therapies to relieve the pressures put onto their bodies from extensive training.  Although there isn't always scientific research to back up claims of alternative therapies the mental aspect of using such treatments can bring a competitive advantage to an athlete.

Traditional Chinese medicine (TCM)  has been around for thousands of years.  Qi (pronounced CHē) is intertwined with TCM, in its simplest form Qi is "energy".  When your Qi is balanced, your body and being are given the healing support needed to regain healthy function.  The most common healing modalities of Traditional Chinese Medicine are Herbal Medicines or dietary supplements, Tai chi and qi gong, and  Acupuncture and Acupressure.

During an acupuncture session, the acupuncture needle acts as a conduit between the patient's Qi and the practitioner's Qi.  When the needles are placed in key acupoints by a skilled acupuncturist who's energy frequency matches yours, the stagnant or blocked Qi in your body is allowed to once again flow freely to assist with healing and pain relief.

Since needles can be rather intimidating for many people, there are adjunct therapies often used with TCM, but can stand on their own for their suggested healing benefits.  Cupping, like Acupuncture has been an ancient Chinese healing therapy.  Cupping therapy became a hot new trend a few years ago with celebrities like Gwyneth Paltrow and Jennifer Anniston proudly sporting the large dark purple or reddish spots generated after a cupping therapy.  Most recently, several of the 2016 Rio Olympians, such as Michael Phelps, Dana Vollmer, and Alex Naddour  are decorated in the dark bruising spots giving more visibility to this Chinese therapeutic modality.

So what is Cupping?

Cupping as described by the Olympic athletes is "negative massage".  Dana Vollmer stated that only so much relief is obtained from pushing into the muscle.  And with Cupping, instead of pushing into the muscle the cupping pulls the muscle up and draws blood to the surface providing relief of pressure.  Cupping for athletes is known as myofascial decompression (MFD).  In MFD, work is required of the athlete.  After the athlete is cupped the physical therapist has the athlete perform specific active movements based on the specific muscles used during their sport.  MFD is also used in the traditional cupping therapy for relaxation versus active motion.

Cupping received its name because variously sized glass cups are used as suction devices that are strategically placed on the skin.  In the most general terms there are two types of cupping: dry cupping and wet cupping.   The glass or sometimes plastic cups have replaced the animal horns of ancient ti

mes.  For cupping to work, suction in the cups must be created.  A dry method known as fire cupping, creates the suction by inserting a fire ball (Using a match lite a cotton swab moistened with alcohol) into the glass cupping jars and quickly removing prior to positioning on the skin.  The heat pulls oxygen out of the cup creating a gentle suction raising the skin inside. If fire is too intimidating you can try dry cupping by using specially designed  vacuum cups that have small pumps attached to remove the air.  Once the superficial muscle tissue is pulled into the cup a therapist can move the cup along with skin while still being attached. This is a widely popular technique that helps to relax tight muscles and promote blood flow in the small capillaries of the body where blood can stagnate. This gliding cupping technique is commonly used for chronic muscle pain.

Wet cupping is believed to release  more toxins because it involves drawing out a small amount of blood during the suction procedure.  Wet cupping involves removing the cup after it's first applied and then quickly prick the skin using a needle or make a small cut with a cupping scalpel.  Once the cup is replaced a small amount of blood is drawn out from the suction.

Cupping therapy was commonly used by the ancient Chinese to treat pulmonary disorders and still to this day is often used to clear congestion in lungs during a common cold.  If you are interested in trying alternative therapies such as cupping, seek out a qualified health expert.  It is always best practice to consult your physician prior to any new medical treatments either traditional or alternative.

Since 1997, AllegroMedical.com has been providing pain relief products online.  With the addition of our Massage Therapy  and Chiropractic Supplies we are now bringing you the popular Cupping Therapy Products used by Therapists on the 2016 US Olympic Team.  If you need to purchase Massage Therapy  and Chiropractic Supplies, rely on AllegroMedical.com for all of your product needs.